Gatsby allows a build to be traced, enabling you to find which plugins or parts of the build are taking the longest. The trace information can be viewed in any OpenTracing compatible tool such as Jaeger. You can also use Zipkin compatible tools such as Zipkin or Honeycomb. 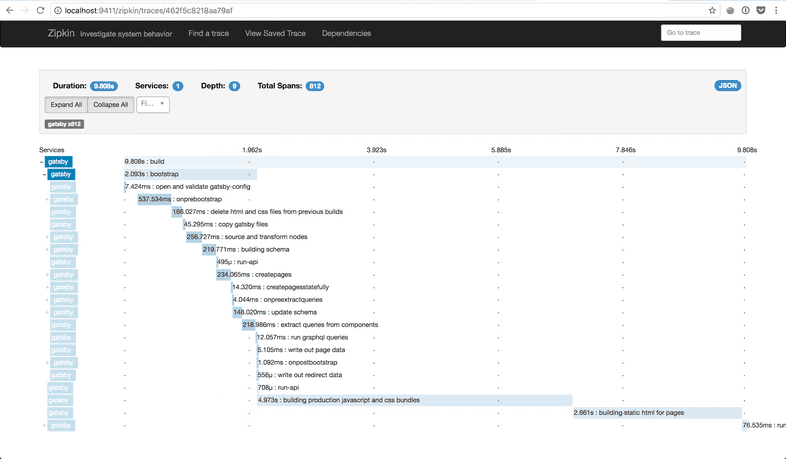 Running Gatsby with tracing turned on

Gatsby code is instrumented with OpenTracing, which is a general tracing API that is implementation agnostic. Therefore, you’ll need to include and configure an OpenTracing compatible library in your application, as well as a backend to collect the trace data.

In addition, Gatsby has additional tracing for GraphQL resolvers. This traces every resolver and might have performance impact, so it’s disabled by default. You can enable it with --graphql-tracing argument for the build command.

The steps required to add tracing are below. Or, you can skip ahead if you want specific instructions for Jaeger or Zipkin.

Add an OpenTracing compatible library to your site’s package.json dependencies.

Each OpenTracing library must be configured. For example, what is the URL of the tracing backend? How often should spans be sent to the backend? What service name should the trace be recorded under? Etc.

The configuration file is a JavaScript file that exports two functions: create and stop.

3. Start Gatsby with tracing turned on

The above configuration file can be passed to Gatsby with the --open-tracing-config-file command-line option or an environment variable named GATSBY_OPEN_TRACING_CONFIG_FILE. When Gatsby is started with this option, it will load the supplied tracing configuration file, and call its create function. The returned Tracer will be used for tracing the build. Once the build has stopped, the configuration file’s stop method will be called, allowing the tracing implementation to perform any cleanup.

There are many OpenTracing compatible backends available. Below are examples of how to hook Jaeger or Zipkin into Gatsby.

OpenTelemetry is the new industry standard for tracing. Most vendors now have built-in support for OpenTelemetry. The following is an example of configuring Gatsby to send build traces to Honeycomb.

Jaeger is an open source tracing system that can be run locally using Docker.

Zipkin is an open source tracing system that can be run locally using Docker.

Adding your own tracing

The default tracing that comes with Gatsby can give you a good idea of which plugins or stages of the build are slowing down your site. But sometimes, you’ll want to trace the internals of your site. Or if you’re a plugin author, you might want to trace long operations.

To provide custom tracing, you can use the tracing object, which is present in the args passed to API implementers. This tracing object contains a function called startSpan. This wraps OpenTracing startSpan, but provides the default childOf: parentSpan span args. startSpan returns a span object that you must explicitly end by calling its .finish() method. For example:

With this span, you can perform any OpenTracing span operation such as span.setTag. Make sure that the tracing backend supports these operations. You can provide an optional second span options argument to startSpan which will be passed to the underlying OpenTracing call.

For advanced use cases, the tracing object also provides tracer and parentSpan fields. You can use these to construct independent spans, or your own child spans (see the OpenTracing project for more info).

Edit this page on GitHub